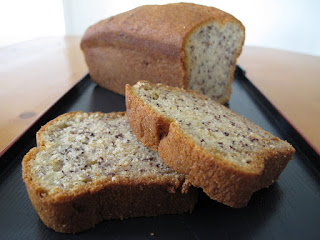 Banana cake! Munch this, all you who eschew bananas for their fuzzy slimy texture! Here lies the goodness of a banana in the squidgy and moist medium of a cake. I made it as one of my contributions to the cake sale at my bf's church this Easter weekend (the rest to be posted in good time). Mostly, I shy from tweaking recipes for the dubious creations that inevitably emerges. However, this adjustment has seen rather encouraging results.

The original recipe I used was from Rose Levy Beranbaum's 'the bread bible.' I found her version rather oily, and it was denser than I would have preferred. Th 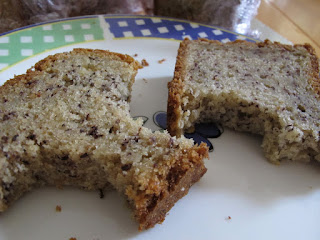 e crispy and somewhat thick crust was very tasty, but also resembled a biscuit more than a cake, while the inside was a little tough and chewy. I must have been doing something wrong (my excuse being that I beat everything by hand instead of whipping it up with a kitchen aid). Anyway, so I wanted to lower the fat in the cake and found that substituting the sour cream for half its weight in milk led to the happy consequence of a lighter and more crumbly cake with a softer crust. I also lowered the oven tempearture to 180°C in order to get more rise before the crust sets. Above is a picture of the two cakes, modified version on the left, but don't think you can really see the difference in texture. Oh, I dislike walnuts so I've chopped them out.

Anyway, I hope this recipe works for you as it does me. Happy Easter to all and may God bless!