It was my sister's boyfriend's birthday yesterday and she generously comissioned me to make this cake. What a leap of faith- thank you!!! It is my first order and, I hope, one of many more to come. This is quite the event for me as it inaugurates the sale of my cakes. Admitedly, I am still slowly trying to amass a catalogue of goodies, but mostly whatever makes the blog will be open for ordering. So, if anybody feels indulgent (in every sense of the word) drop me a request, and feel free to customize as you will! The cakes will be made to the best of my ability. However, as I'm mostly lacking in that still, it will be compensated in the astounding price of £10-£15 per cake (the proceeds of which will go to church). 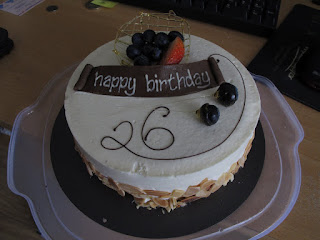 Now, back to the cake. My sister was quite adamant about its non-fussiness; it was to be just a good old chocolate sponge. A slice through the middle would reveal two thinly spread layers of ganache between four slices of genoise, and a thick filling of whipped cream and blueberry sauce (? perhaps sauce isn't the right term, but it does describe how it was prepared). I spread the ganache on both sides of the genoise and, between them, arranged some toasted flaked almonds. The almonds were a last minute addition. I happened to see some salted dark chocolate by Lindt (nope, none of the high quality chocolate couveture yet) that begged to be tried. After extensive tasting, I decided it would go very happily with savory nuts.

As my sister would probably have preferred a less rich cake, I did wrestle a bit with the ganache: to whip or not to whip. Should I lighten it to her taste, or keep its lovely decadent mouthfeel? In a practise attempt of this cake, I did both. The velvety ganache went into the cake while its aerated counterpart was piped over the top. Sparingly used inside the cake, its richness would contrast to the airy chantilly cream filling without making the cake too dense. On the top of the cake the whipped ganache was to allow for easier eating given its more liberal use. However, as you can see, I dropped the ganache decoration in the final version; I ate it for breakfast instead XD. 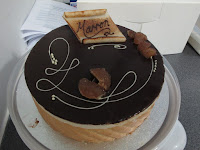 Chocolate piping is starting to become the bane of my baking endeavours. It is a distinctive struggle and to have to pipe in cursive is a straw too much. I write in block letters that slant backwards, need I say more? To think that writing in cursive would become so important. Admittedly, I did not initially realise just what a trial would become: my first attempt in LCB during the making of 'entremet aux marrons,' depicted on the left, came out tolerably well except for an inadvertent spasm which jabbed my piping bag into the marzipan as I was finishing the 'M.'

Btw- pls excuse the poor photo, I was in a rush to pack the cake away to be taken to my sis. Sad things happened after, the cake was bopped and the sugar basket and spike melted into unsightly puddles T_T
Posted by mabel at 14:58