So I mentioned in my previous post that I did some baking over Easter weekend for my bf's church cake sale. Here were my contributions: 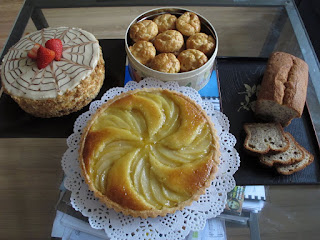 Starting from the top left is mille-feuille, an unconventional circular version as taught at LCB. Its base consists of two layers of puff pastry sandwiched together with confiture for extra stability and it only has one layer of creme mousseline and strawberries before its top layer of puff pastry and fondant (yes I know, chocolate work and presentation in general needs serious work). I'm still not sure whether I like creme mousseline- my favourite of the creme patissiere derivations remains creme diplomat. Moving clockwise are the 'gougeres,' though it is probably sacrilege to call them so in this case as I used mature cheddar, instead of the traditional gruyere, in the pate choux. Next is the banana cake, of my previous post (the sliced portions were made according to the original recipe- you can see that in some parts the 'biscuit' crust has actually lifted off the cake), followed by a ginger pear and almond bakewell-esque tart, to be covered in the next post.
Posted by mabel at 18:23