There is a marvelous blog I want to link to but I'm not too sure about blogging etiquette concerning this. I've sent the author of said blog an enquiring comment and thought I would post this while waiting to hear from her. 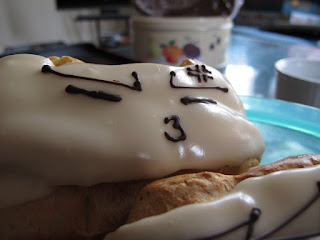 It has been a while since I made eclairs- not since the LCB basic patisserie exam in fact. Eclairs were my draw of the straw and I thought I could scrape by. What I did not envisage were the hulk-like eclairs that spawned during the exam. Mine weren't the only victims, it seemed that quite a few in my class making eclairs was similarly stricken. One poor fellow, taking a tentative peek at the progress of his eclairs, actually staggered back in shock and clutched his chest (perhaps I exaggerate, but not by much) upon beholding the monsters within. Monsters!!!

Any Ai Yazawa fans out there should instantly recognise this expression on my eclair, occasionally presented to Takumi in the manga Nana. Forgive the blobby and non-shiny 'fondant,' and the poor piping. I was grumpy when I made this giant replica over Easter weekend and lost patience with my badly rolled piping bag. I also used some leftover fondant substitute- tried to economize by buying fondant sugar that you add water to. Unfortunately, you never get the same glossiness (it is the 'rolling fondant') and, as it had been sitting around for a while without a film of water over it, it acquired a crust that refused to dissolve away. Anyways, it makes me laugh, and I still can't bring myself to eat it/throw it away. When I can face true eclairs again, I'll probably post more acceptable specimens.

On a separate note (a niggling) there seemed to be a general consensus that eclairs were the hardest of our given recipes to make in the LCB exam by a substantial difference. It is all a little odd, like sitting the same exam but being presented different papers of varying difficulties and then not having the results weighted.
Posted by mabel at 11:31