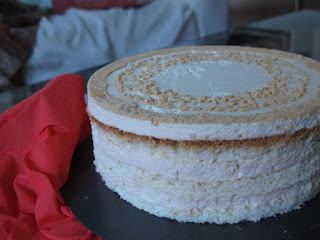 I mentioned in my previous post the singular light and fluffiness of a sponge, which is almost on par of that with a chiffon despite not beating the eggwhites separately. True, it is not as soft either, but the use of butter over vegetable oil in a traditional chiffon yields definite improvements in the area of taste.

Anyway, the origins of this little sponge aren't too inspired- it was the product of a little mishap in the kitchen during a practical at LCB. For some odd reason, I decided to tam 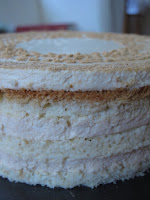 per with bits of the recipe, while being persuaded that I was abiding by it ad pedem litterae (I don't understand it either). The resulting genoise grew and grew and grew. It took a startled comparison to the sponge next door before realisation dawned and I frantically beat up another sponge. It was a very harried time. On the other hand, the accidental sponge turned out incredibly soft and light, no doubt thanks to the disproportionate amount of egg in it.

Anyway, so here is the recipe:

The sponge doesn't actually look too attractive sitting unadorned (when I have the time I will post a photo of its plain little self), which was fine by me as I wanted only its fluffy texture to carry the roasted rice and soya mousse and none of the sweet crust that I so enjoy eating. However, do keep this in mind if ever you decide you want to use my recipe.

For this cake, I baked the sponge in an 18cm diameter tin, which I later sliced before using a 16cm diameter ring to trim out crustless discs to build with. Too bad I forgot about the crust on the bottom disc. On hindsight, next time I will also discard that top mousse layer altogether- the cake looks very strange with it sitting atop the crust, as well as slightly disproportionate at the teetering height it is. So forgive the poor presentation this time, it shall be improved. The next time will see a beautifully wholly pale cake.
Posted by mabel at 09:38