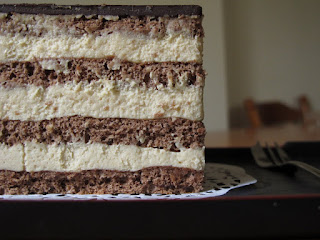 The roasted rice and soya mousse idea is my little baby and spiel about it I will!!! Personally I am no fan of soya- it has the oddest aftertaste and I still firmly maintain it was the reason I carefully emptied the contents of my stomach onto the marble floor one fine day many years ago. I only decided to use it after a (very tentative) sip of my boyfriend's soya latte and was pleasantly surprised by its nutty taste and the complete absences of the icky aftertaste I so objected to. Sadly I have since realised that the nuttiness was probably derived from the use of barley malt syrup rather than soya. Nevertheless, it was cause for contemplation and set the wheel trundling. 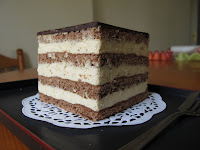 was a matcha and soya mousse. Green tea flavoured baked edibles seem all the rage nowadays, but it is a wagon I am loathe to clamber upon. It seems a bit of a waste as so much of the fragrance and flavours of the green tea just gets smothered with everything else. Besides the unattractive greyish green it becomes, I also just get too much of the bitterness such as when tea is, horror upon horrors, boiled, which is hardly surprising considering the temperatures it has to endure in the oven. Green tea shouldn't ever be steeped in water above 70-80°C (or less, depending on its quality) so baking it is not a happy option! Green tea in icecream is another matter, as in mousse- the route I intended to traverse. However, as I eyed the miniscule tin of matcha that set my mum back a respectable 50 pounds I couldn't bring myself to have it any other way than its unadulterated form.

That's when I thought of genmai-chi! In fact, forget green tea completely 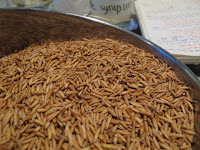 , I would flavour the mousse with roasted rice. It would contribute a roasted nuttiness to compliment the soya AND pack a more robust punch that won't be easily stomped over by the soya. In fact, it might even take away the nasty soya aftertaste (it does, and I am so glad for it). It took several attempts to get this right- creaminess, set and flavour- and also a whole bag of organic brown rice that I painstakingly roasted and steeped in hot water then reduced only to find that the rice flavour was still too faint, but that there is a wonderful vietnamese product 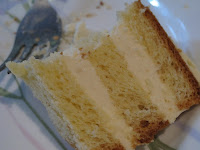 of powdered roasted rice (bot thinh gao) that does the job admirably. On the right is a comparison photo of the mousse when the home-made roasted rice tea was used. The mousse was a brilliant white and only the soya could be tasted. Note the lovely lightness of the sponge, more on which will be said in the next post.

I really am ecstatic over this little recipe- it is my own and it is good!

NB- soya milk can and does curdle if heated and in acidic conditions. This isn't the case here but its good to know that if ever you decide to pour steaming hot coffee into cold soya milk.

In the cake above, I piped out (hence the non-straight surfaces) some of my extra chocolate biscuit sponge mix, from the mango and caramel charlotte, which I then baked and used a mousse ring to cut out 80mm squares. These were stacked inside the mould with 45g of the mousse between each sponge square. I over-torched the mould while removing it and smeared the mousse up over the edges of the cake layers; a slice of the inside was much prettier.
Posted by mabel at 02:17