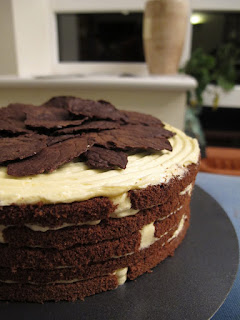 This is it, the exciting thought that had me babbling mid-week: brickwork cake!!! It looks a bit shoddy at the momentbut I will someday achieve clean cut edges and well arranged 'bricks.' I used a heavily enriched chocolate sponge (from the Black Forest cake taught us at LCB) for the 'bricks' and the motar was a honey buttercream taken from Rose Levy Beranbaums' 'the cake bible.' Besides being lovely and moist, this sponge also has a denser crumb which is perfect for my special brickwork presentation! Over the top of the cake are some minty chocolate leaves, making it look rather autumnal. I shan't be painting chocolate over mint leaves the next time round though. They made the chocolate bloom as it set, and didn't impart as fresh a fragrance as I thought it would- it tasted more like wilted mint chocolate. 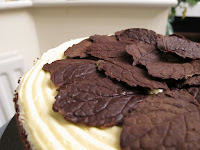 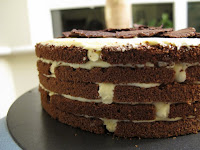 I didn't segment the cake layers to get this-only used a plain nozzle to cut little notches into the edge of the sponges-so it still retains its structural integrity. I suppose the next obvious step is to actually build a cake out of sponge bricks and a brief consideration has persuaded me that a carrot cake would do excellently. It is of a good dense material, and a carrot and cream frosted brickwall cake would mean the cream frosting is nicely distributed about the cake rather than just being concentrated in a super thick layer over the top of the cake, which is another thing that irks me.

An earlier attempt at this presentation was actually for a soya roasted rice chocolate cake order (apologies to my lovely customer for the struggling presentation). The 'motar' layer in this cake is much thicker than I would have preferred, but necessary in order to get the taste balance acceptable as it consisted of a light mousse. However, with the use of buttercream, I could make the motar layer much thinner (a small amount of buttercream goes a very long way). T'was a grievous thing that my mousse starting setting on me as I was piping it on. I did already have a trial of my brick idea with the trimmings of the mango Sabrina before attempting the order, so this little order was not a complete experiment (rest assured!). I am still at two minds as to whether not having the 'motar' layer coming up flush to the edge of the sponge yields an improvement in appearance. It makes it look less clean and refined but the rustic-ness it gives is more in keeping with the crumbling brickwall theme. 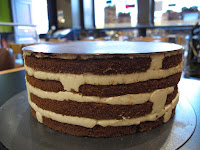 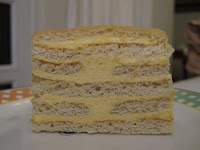