chocolate mousse with mango and lime

This isn't the mind boggling idea that plopped on my head yesterday (that is still pent up in my head and gnashing its teeth to be made). Instead, I have a more pressing issue at hand: a moussey pud for a wedding this weekend. The worthy fellow who roped me in under his service has kindly allowed me to exercise my piddling creative muscle (singular..), the only constraint being that they had to be served in little cups, and this is the mouthful I came up with. Hopefully, there are a lot of hopefully's in this blog, it will hop the bar to be granted permission to grace the table of a blissful couple and post-Friday lectures shall see me racing off to the kitchens to prep for the big day. 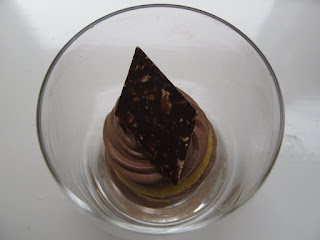 So here you have: a chocolate mousse sitting atop a crispy thin pate sucree base, within which are two discs of biscuit sponge very liberally doused in a mango and lime coulis and topped with a (too big) fragment of salty almond chocolate.

The pate sucree is to provide the crunch in this dish and does not need to support anything, which is why I rolled it out fairly thin, about 2mm. To keep it crisp, it was also eggwashed to seal it from the soggifying influence of the mousse. I did think of spreading chocolate over, but worried some of the crumbliness of the pate sucree would be lost then. It also has a hint of lime zest in it.

The biscuit sponge here is made by separately whipping up the whites and yolks, instead of the genoise method, resulting in a slightly coarser and drier texture. It doesn't sound as appealing as the moist and tender genoise version, but necessary as it is to sit in the mousse overnight and needs to be able to hold the coulis (a lot of the decisions made concerning this pudding had to account for its extended spell in the fridge before serving). The sponge took a little swim in the coulis, rather than the customary soaking- I wanted it to be soaked through so its 'wetness' melds with the mousse around it, while itself still retaining a little chew. A genoise version would have descended into mush with this wet treatment. The lime was a very necessary component of the coulis: to offset the sweetness of the mango and brought a refreshing tang to the dish; and to loosen the coulis that it may soak through the sponge better.

Lastly, the chocolate decoration draws from an earlier cake I made where toasted flakes of almonds were sandwiched between a salted chocolate ganache. The almond flakes did not stay as crunchy and this seemed a good time to rectify that, being now now more acquainted with tempering chocolate and with my weakness for salted dark chocolate not yet abated. So, I toasted some flaked almonds, crushed and tossed them into some tempered chocolate along with some coarse sea salt, and rolled out. I didn't realise just how small the chocolate piece would need to be as I was cutting it (too late as well- it set while I was cutting and you can see sad little cracks) so it is larger than I would have preferred, and also thicker. On the other hand, it does have a snap to it!!! 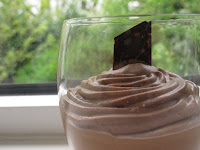 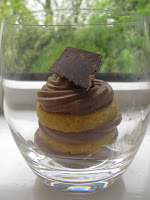 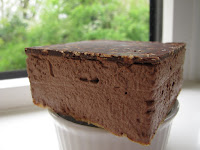 I wasn't sure if it would be better to have the sponge layers concealed or not- they do make an ungainly wodge between the mousse. So here you have a photo of both. In the 'stacked' version, I used thinner layers of sponge in keeping with the smaller quantity of mousse, while the more bountiful version, as well as having more mousse also had a much thicker portion of sponge. I didn't realise piping into a cup would pose so many issues either, but it did, and the curved sides of the cup coupled with my bad piping in general gives this sorry look. On the right-hand side is a none-cup version of the dessert where I set the mousse in a ring and topped with a square of the chocolate. I can't seem to get the removal of the rings right. Before with the soya mousse, I overtorched it and it started to dribble, but this time I warmed it with my hands before removing the ring and tore chunks of mousse off the sides (besides also having the dreaded air pockets). The presentation is making me want to kick myself. 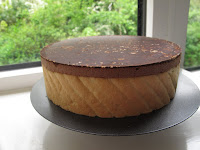 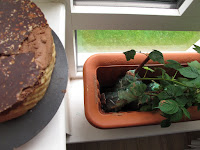 It feels that since Monday my clumsiness has reached unparelled heights. It began with the soaking of myself rather than the Opera I was making (which in the end turned out well), followed by a layered sponge cake that I sat upon, leaving neat bum imprints on its squashed remains, and topped off today by my thoughtfully nudging a chocolate charlotte (from the leftover chocolate mousse) off the windowstill onto some indignant redcurrant cuttings as my bf stoof by gaping. The plants weren't too impressed by this unexpected shower either and gave me a curt little prick as I scooped the cake back up. I am at two minds now: to give up baking for the day in case of any more maladroit occurences, or to continue as I've met my blunder quota for the day. Above, you see my chocolate charlotte in its pristine state before the fall, and the shattered wreck after.
Posted by mabel at 19:03