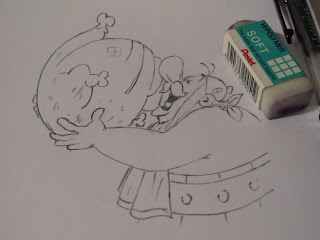 As a rule, I tend not to venture into buffets (and not just because of the stodge frequently proffered). After scenes of horrific gluttony even as I tried to exercise my feeble self control, my bf and I had after great consideration branded such areas unsafe to the health and subsequently off-limits. Thus my many attempts to lead us to such establishments are usually tactfully thwarted by him. This evening however he succumbed and, following the gusty feeding, we came away like the fat squirrel in the park we used to feed, who waddled off triumphantly with two nuts instead of one.

It was a strenuous walk home and once back I flopped onto my bean bag like an exhausted walrus without even the saving coolness of monster tusks. Between myself and the beanbag, in both form and nature, 'it was impossible to say which was which.' (Animal Farm).
Posted by mabel at 22:48

Email ThisBlogThis!Share to TwitterShare to FacebookShare to Pinterest
Labels: buffet