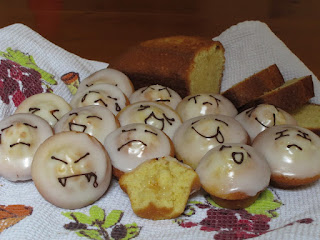 Despite all the LCB creations I have been dutifully bringing home, my brother still insists that the dish he likes best remains the homely Hugh F-W style lemon loaf cake. As him and his friends were embarking on an awesome boardgame weekend away, I thought it would be a good time to send him off with a hardier ration, such as this cake he often requested for. I only hope that it tasted as good as the first time; the flour I use feels a lot drier than in LCB and I've found that often I need to use a lot more liquid than the recipe calls for, such as in puff and choux pastry, and this cake.

In the other restaurant where I had a trial day in the kitchen, they also served lemon curd in a very light steamed sponge. I personally thought it would do better as a filling in a more substantial and crustier cake so I baked some of this orange cake batter in some mini muffin pans, cored out little wells, and filled with lemon curd before corking it back up and topping with fondant. The faces are the inspiration of some stickers I bought in Artbox. I have to admit that while a nice moist filling is pretty essential in a drier muffing such as this (I did raise the baking temperature to try retain some moisture) and that the lemon curd does the job admirably, I still only find the curd just about palatable. Normally, I wouldn't touch the stuff- it is the strange metallic almost aftertaste (curbed in this case by the cake) that so puts me off.
Posted by mabel at 00:05