So this blog isn't exclusively on food...a hapless little spider shall be documented too. 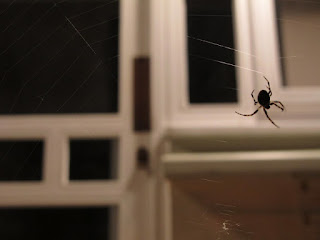 I met it on my way home last night; it barred the entry to my flat with the foundations of a massive web stretched across the stairway. Initially, I just wanted a photo of the spider, but as I sat on the, thankfully dry, stairs and watched it meticulously building its web, it was hard not to be caught up (ho ho) with it. For the first time in my life I witnessed the construction of a web! Twenty minutes later, stiff but marvelling, I scrabbled under the webbing, with no small amount of difficulty, to my own home. I only hope the spider caught a juicy morsel soon after my departure as a mere half hour later my brothered tramped through the door casually remarking on a web he had blithely strolled through.
Posted by mabel at 19:15

Email ThisBlogThis!Share to TwitterShare to FacebookShare to Pinterest
Labels: spider