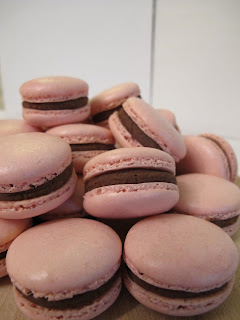 Alright, so I have been slack for days and have done hardly any baking (those drop cookies don't count) but spent my hours poring through manga and eating. Already I have churned though Yotsubato (my favourite!!! XD), Naruto (all over again), 20th Century Boys, Yokohama Kaidashi Kikou, Ashito no Joe, Eyeshield 21, Hajime no Ippo, Prince of Tennis, and various shouju mangas like Pastel and even Peach Girl. Oh dear, regression. But but, I'm reading Dostoyevsky's 'The Idiot' now... I guess only a good post can redeem such behaviour. So, I have decided to make macaroons filled with adzuki/red bean paste!!! 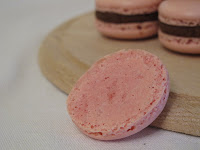 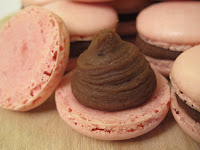 The paste was made by boiling the beans, throwing out the scummy water of the first boil, and then continuing with a clean jug of water until mushy oblivion. The pulpy mass was then transferred to a food processor where I blended it for a good twenty minutes to make the texture as fine as possible (it didn't help that the b 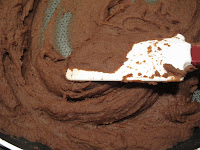 eans I had were old and tough with skins that adamantly refused to soften). The resulting paste was cooked with rapeseed oil and sugar in a saucepan until it started to bloop, then quickly wrapped in clingfilm to cool without the formation of dreaded crusts (less crucial here than with pastry cream or curds but good to do all the same).

Japanese versions of adzuki bean paste tends to use a lot less oil than the Chinese version, but a little more sugar. It doesn't coat the mouth quite so well as the richer Chinese paste and, being used to the oilier version, it comes across just a little watery and insipid. For me, it is the texture of the Japanese paste that most disadvantages it against its Chinese counterpart. Its powdery-ness dries my mouth and I am left with a nagging urge to try scrape my tongue clean whereas the Chinese paste feels luxuriously smooth and very pleasant. On the other hand, the beany taste of the Japanese paste is much cleaner. I guess its just like water-based ganache vs cream-based.

For these macaroons, my paste is more Chinese-style. I wanted it to be able to hold its shape while remaining silky and was also felt that a water-based paste would fare worse when left to dry by way of cracking crusts. Lastly, it would give a richness to the macaroon- something you certainly don't get from its shell. Thus amount of oil (rapeseed, not traditional lard) and sugar (not so much- the sweetness to come from the macaroon shell) I used are completely too taste and texture- no scales for this one. I think it would be difficult to follow a set recipe as the paste is so easily affected by the age of the beans and its water content. In this case, consistency comes from the tasting.

Besides having plenty of paste for the macaroons, I also mad 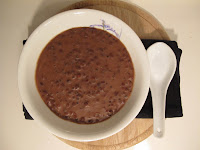 e some hong dou shui with sago and coconut milk (pity the lack of orange peel) and still had a whole tub of blended beans (without the oil and sugar) left over to be frozen for the future. Yays!!! Think what good things I shall be able to do with that: adzuki bean entremets and what about adzuki bean pastries to boot? Expect more from this front!

Update: Wailey! I packed the freshly made macaroons in an airtight box and came back next day to find the shells literally melting off. On the otherhand, the reject macaroons left on the table are pristine. Humph. Next time, as well as leaving them out to air, it would be nice to flavour the paste with something sharp like yuzu. I wager that would be awesome!