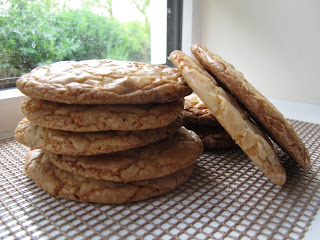 The candied almond and almond flakes were meant to be used in the decoration of a banana and coconut pudding. But woeful things happened: the chocolate casing was too delicate to contain the mousse so cracked allowing the mousse to ooze steadily out; the water-based ganache core set too hard; the surface texturing did not work (a short rant on this is to follow); and the condensation on the chocolate casing as I unmoulded the pudding made it all speckled. Absolute fail, but at least I know now what not to do and shall be re-attempting this shortly. However, it did also mean that I had a lot of candied almonds sitting around and waiting to be served on a pudding that never would be. So I chopped and baked them into cookies. 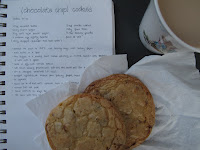 These are the optimal cookies for me! They are not overly doughy like Ben's cookies, nor sweet and oily like Millie's, but have a nice crisp edge and soft interior. Once out of the oven, I immediately transfered them onto a cooling rack to keep them from getting too dry and crispy. Using light brown sugar also makes a whole lot of difference to the taste and texture. You can see the recipe if you click enlarge the photo of my recipe book. I used 10g less castor sugar than stated, and it is a heaped half teaspoon of baking powder. It's been such a long time since I made this-they harken back to the post-LCB days when all my successful cookings were bound up in that fading notebook.

So, back to the dreadful pudding fail. I meant to give the surface of the mousse a lovely textured surface was made by building the pudding upside down onto a 'structure sheet' and freezing before unmoulding. I tried this previously with an ill fated white chocolate with coconut and caramelized peach entremet on the suggestion by the chef at school that the sheets worked well with mousses. So, I was more than horrified when I painstakingly built up my entremet, flipped it over, and ripped off its entire surface in removing the structure sheet. When I came wailing back to the chef he merely glanced at me in surprise and said it had to be frozen first, and was this not obvious? Non? Well actually, mister, it doesn't work even if you freeze it! I had to endure the whole 'ripping' experience another eight times (individual servings you see). RAWR!!!!
Posted by mabel at 21:09