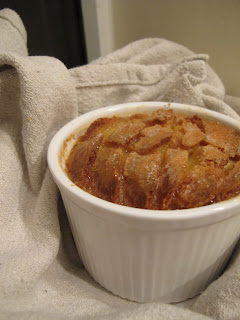 As the name implies, the custard is honey flavoured (and what better combination than honey and apricot) and made by substituting half the sugar quantity with two thirds of its weight in honey- honey tastes sweeter. I used baguettes as I love crusts and wanted to maximise their occurrences in the pud. For me, the sugar coated crust of a bread and butter pudding is the highlight of an otherwise textureless mass of rich soggy bread. The apricots were added in the hopes of bringing a new dimension to this drab little pud, and were roasted in the oven to caramelize and intensify their flavours.

You may have just gathered, I am rather cool towards bread and butter pudding. But, I did have a lot of custard l 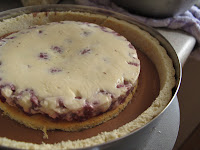 eftover from making the raspberry and creme brulee core of a chocolate entremet (see pic!- the little red bits are the raspberries and the huge dimple due to an air bubble in the clingfilm) that I thought I may as well use it up. I also added an extra 40g yolk to the custard to account for the extra water in the honey and fruit, and because I want it to have a firmer set for easier handling in the entremet.

Having tried the pudding, I am slightly disappointed to taste only a trace of honey. The apricots perfumed everything and at least brought some flavour to the pudding but I personally found them a bit of a shock compared to their bland counterparts. Sadly, brioche and butter pudding still remains the only version of this dessert that I would care to have a mushy mouthful of.
Posted by mabel at 03:02