The recent dearth of posts is due partly to the sapping heat that has made even the thought of kitchen faffing faintly repugnant, and partly to a string of epic failures in the kitchen. Portuguese egg tarts were the elusive ambition. I even wanted to plant a juicy little raspberry in its depth (welcome of not, depending on the books of puritanical creme brulee connoisseurs). But sadly this was not to be. I have tried various recipes now- baking the puff pastry base blind or all at once with the custard; egg washing the blind baked pastry; varying the baking temperatures for the custard; using a bain marie- even to the point of finally resorting to ready-made puff pastry as I completely churned through my own precious stock of home-made puff pastry (until now I had not realised how pronounced the difference in taste between proper butter puff pastry and nasty margarine puff pastry was) and all to no avail. It is ever so odd and frustrating but there seems no way for me to achieve a completely crisp base while this is clearly possible as there are contented people out there in the world doddering away with apparently lovely results from the same recipe. The crispiest version was when I baked the tart at a prescribed 200C, without blind baking the base, but which also boiled the custard curdling it. So if anyone knows how to make this, or have any pointers for success, tell me please! 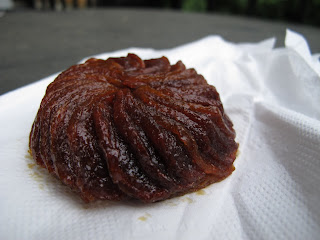 Here now is a marginally more acceptable creation of coconut tart tartin, a variation of what we did at school. It consists of slices of apples with a coconut caramel baked in a cupcake pan and sitting atop some puff pastry. The apple slices being larger than the cupcake dimple are folded in on themselves to make a nice little package. Next time I will slice them thinner- while this is a good size for the larger tarte tartins I made at LCB, its is a little too thick here. I also did an extra tatin using plums (shown above). They were a very disappointing purchase from the market, refusing to ripen but remaining rock hard while slowly wrinkling away. So for that, they received a good poaching in the coconut caramel and just to spite me they came out all rubbery and waterless. 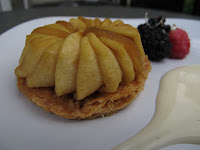 re is a photo of the apple version. Sigh, really dislike this particular tarte (the last one made- distinctly less caramelised than the first) as well as the photo, but by the time I had browsed through my photos and hurried back for another take, the poor thing had already been eaten.

For the coconut caramel, I tried various coconut products ranging from virgin coconut oil to creamed coconut to coconut cream and finally coconut milk. In my mind, the virgin coconut oil works best for this. It gives the best texture and a more subtle coconut taste (though I wonder if anybody who ate it noticed). I do like the creamed coconut- a solid mass of compressed coconut cream (I think) from which you can see a separate later of coconut oil- version. The non-oil component browns/burns very nicely in the caramel making it incredibly coconutty and quite a dominant flavour. However, these delicious bitties do also spoil the texture (I tried using it in mousse and while it tasted fine, the mouthfeel was very gritty). The coconut cream is the next best alternative, but the resulting caramel just isn't as glossy or smooth. Coconut milk is a little too watered down. I did not use any salt this time, the coconut is the accompaniment and not the main flavour. I have tried the coconut caramel with peaches and bananas (wanted a caramelised top for my banana loaf but it just would not happen as the high water content in the bananas steamed through the cake reducing it to a soggy sponge) with pleasing results, but this is the first with apples. It is all pretty good though!

On a different note, I am unwilllingly beginning to accept that perhaps I am overly partial to salt. The grimace the chef made at LCB when she tasted my excessively salted caramel hit home, as did my brother's close expulsion of that same caramel from his mouth. Hopefully I am not the only one, but I actually quite like salt on apples too. In the good old days, my mum would methodically wash our cut apples in salt water to 'make sure they are clean' before serving them. I loved the thin film of saltiness before I crunched into the sweet interior and to this day very happily sprinkle a little salt over my apples.
Posted by mabel at 13:18