Soba is perfect for hot, muggy and uncomfortable days as this. Some time back, I did finally make my own kaeshi (recipe here) and now have it stored in the fridge next to a bottle of dashi, nicely in hand for when I want to make the dipping sauce for the soba. My kaeshi stock did take a severe hit last week though when my bf mistook if for Pepsi (it was in a Pepsi bottle) and glugged it down. All sorts of awful splutterings and garglings ensued but really, you would have thought that its pungent smell, gloopiness and lack of carbonation were indications enough that it wasn't the anticipated drink. 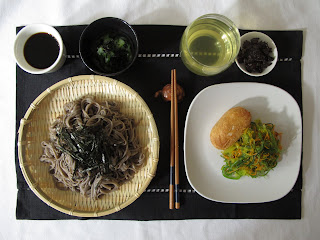 I also prepared a light appetizer of kyuri no wakame sunomono topped with a sprinkling of black sesame seeds and supplemented the meal with leftover inari, vegetable and seaweed chuka salad, and shima no kaori tsukudani (seasoned clams) from Japan Centre. To wash it all down is a steaming cup of genmai-chi. It may be a bit of a haphazard meal but delicious none the less. 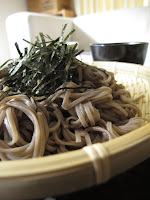 ems from the lessons I had six years ago under an excellent Japanese expatriate. She painstakingly taught all four of us the basics of typical Japanese fare, in this case the use of salt to take out the bitterness of the kyuri and draw out its moisture rendering it 'springy-crunchy.' Before, I would just lob off the top of the kyuri and rub the sliced ends to collect out a foamy sap. So now I can make good old agedashi tofu, potato korukke, horeso no gomaae, shiraae, kenjinjiru and whatnot to my hearts content. It wasn't all happy sailing though as the preparation of the rice was a touchy moment of every class. The poor lady did try so hard to show us how to scrub/polish the rice but every time I could almost see her heart shrivelling up inside her when our clumsy fingers crushed the 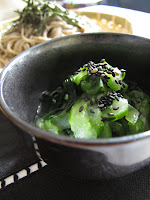 grains as she allowed us all a perfunctionary attempt at washing the rice. Then she would gently but firmly removed the rice bucket from our hands and pick out the broken bits of rice, all the while throwing us reproachful glances. It will be a while before I dare post anything on rice but soba is doable. These have been boiled in barely simmering water before undergoing a thorough wash and then twisted into sizable portions ready to be swooped up by eager chopsticks.

Inari is one of my favourite things to eat and I was incredibly pleased when I found the preparation of the aburaage cases would be covered in our classes. My inari is a little more generous on the aburaage front than Japan Centre though, out of personal preference. Normally I use enough aburaage so that I can fold either sides of the opening over each other while at Japan Centre, the sides of the opening barely meet. Chuka salad is another favourite of mine but one I cannot make myself as nobody anywhere seems to know the seaweed used (the vegetables added in this version are carrots and mooli). 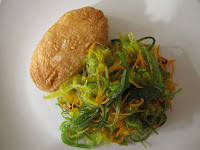 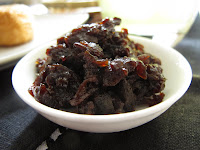