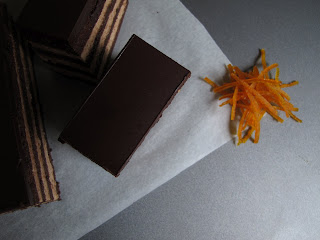 It is odd, the more I handle adzuki bean in its unadulturate form sans sugar or oil, I am increasingly aware of its odd musky com mouldy smell that is becoming distinctly unappealing. So, in regard of what is often done in hong dou sui, I have used a fair amount of orange flavoured syrup to tone down the beany and bring some freshness to the adzuki bean mousse. Along with that is a super soft and tender (typical attributes of flourless goods) gluten free chocolate sponge and some candied orange peel. Like this, it becomes quite pleasant indeed.

My experimentation with adzuki bean mousse began with the notable Starcraft 2 undertaking- as a component of the charlotte atop which the chocolate pieces were to be stood- with its brownish red hue to represent human blood. It was not used in the end but I put the multiple 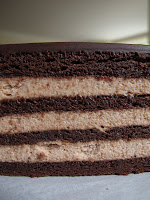 attempts to good use and made a looser set mousse version for this cake. Initially I used coconut cream in the mousse too, but scrapped that as it 'blended' everything together so you lost the distinction of the flavours (I firmly maintain that you can taste the bean quite clearly while my brother insists that the chocolate overwhelms everything).

I meant to make a soft and silky ganache to pour over the cake but I am still struggling to get a completely smooth sheeny result. Instead, I used a firm glacage made primarily of pate a glace with some extra couverture (for taste) and oil (for shine) to give me the nice smooth surface and crisp edges you see here. Now if only I could learn to cut perpendicular slices...