Here are some of the contributions to the Starcraft 2 themed buffet organised by Chris, photos of which are to be entered into the GOM TV photo contest. Together, we made a coconut charlotte, a yam charlotte, fruit jellies, chocolate mousse filled chocolate cups, and coffee macaroons. 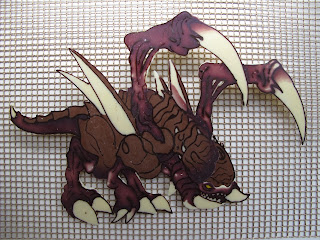 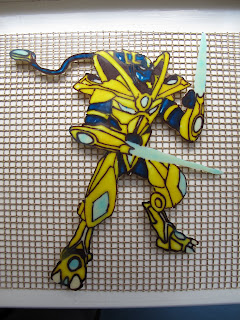 The charlottes were to act as stands for the zergling and zealot chocolate pieces above, hence the chocolate plaque atop them. The zergling chocolate piece attempt was definitely the better of the two. Initially, as both pieces were to sit on the same charlotte, the charlotte was to have a layer of adzuki bean, yam and coconut mousse to represent human, zerg and protoss blood respectively. A last minute change of plans made for the charlottes to be singly flavored. Along the sides of the cakes are also stenciled the iconic black and orange GOM TV logo. The photo far below is of the stencil paste as seen on the cake (the actual stencil used is a reflected version). Mutterations- I should have been more careful in the piping of the logo as they spread during the baking. However, I am really happy with the yam mousse and shall definitely be posting a finalized version of this in the future.
The fox shaped fruit jelly is a tribute to FXO.GuMiho (gumi 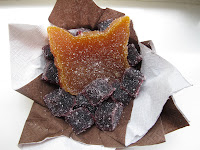 ho = fox in Korean and gumi also sounds like gummy- the jelly). It took several trials to get the pectin and acid ratio right to obtain firm fruit jellies, kinda like solid jam. Left on their own they seem to cope alright, however, covered in sugar and given enough time they suck in a ridiculous amount of moisture, melting and oozing themselves into a very sorry state. Anyway, the foxy orange colored jelly is orange, mango and passion fruit flavored while the purple cubes of jelly is grape. 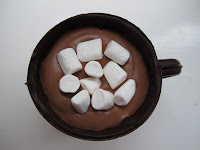 Massive disclaimer here wrt the chocolate cups, which were a definite case of trial and error (molded chocolates are only to be covered in the superior patisserie course that I shan't be attending). I think I am slowly getting the hang of them now; as always its about the temperature of the chocolate and having TWO coatings to get the required chocolate thickness. You can't see the wording, but 'SLAYERS' was piped onto the chocolate mould in reference to SlayerS.CoCa. The cups were filled with chocolate mousse and marshmellows.

Last are the macaroons (MarineKing) with a coffee buttercream filling to replicate the effect of stimpacks, what with the caffeine and energy overload. These are Chris' little handiwork and never again shall the world see such intense concentration as he exhibited while piping the initial few out. Sadly I don't have a photo of them as they pushed us over the time constraint and the buttercream filling even had the audacity to curdle.

All in, a big well done and thank you to Chris who expended a lot of hard work and time in to this. The self-imposed drudge has taken a whole reel of photographs during the making of the puddings and is also putting together a mini-clip to be submitted to GOM TV, complete with Korean subtitles. I really hope he makes it to Korean stardom.

Update: I have yet to collect the thumbdrive from Chris with all the photos to post, however, he has made a short clip about the buffet. Please check it out here.
Posted by mabel at 00:20