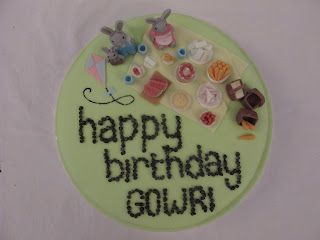 Tadaa! XD My Sylvanian family themed birthday cake is ready to debut! Ho ho, it really did turn out to be better than expected. I am pretty comfortable working in 2D, hence why I mostly only did piping-work on my celebration cake at LCB, but rather apprehensive of moving on to the next dimension. The leap made, it seems I've landed on dry, safe ground...mostly. 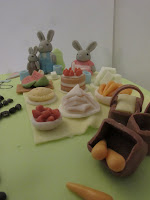 The main extra feature here not included in the previous post is the multitude of pebbles (instead of royal icing in case there are little people who ought not have raw egg whites) spelling out the birthday message. These took unexpectedly long to make. Rolling out irregular stone shapes is a lot harder than standard spheres, especially if you are trying to ensure no two stones are like. I hope the peoples notice the marbling in the stones made by mixing two different shades of gray coloured sugarpaste together. Sticking them onto the cake was even more time consuming as the first time round I messed up the spacing and smeared black over the entire cake surface. In the end there was no salvaging and I had to lift off the entire icing, remask the cake and roll on a new layer. This incurred an extra 3hrs labour, deducted from my sleeping time. Woes. I also added a kite as that area felt too empty.

Unlike at LCB where we used a fruitcake, within the walls of its sugarpaste cell lies a light sponge made from my own special recipe here with the addition of a few drops of vanilla. One recipe makes a single 3cm thick layer of soft fluffiness; I made the recipe twic 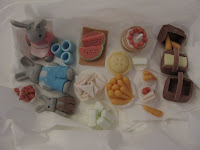 e over to get my two layers. I decided not to do a third layer so as not to task the poor structural integrity of the sponge. Between the layers is some homemade jam and creme mousseline. A thin layer of the creme was also spread over the entire surface of the cake to help the sugarpaste stick to it. I used creme mousseline instead of the standard buttercream to make it as vanilla-ry as possible- following orders you see. I only hope the cake survives the journey away (here you see the sugarpaste models suitably cushioned for the trip) and refrigeration, and goes on to please its patrons.
Posted by mabel at 06:51