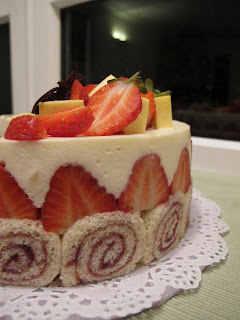 Finally a post! The whole family has converged on the flat so things are a little crowded and distracting. Unable to handle the scrutiny of various peering eyes and the contention for kitchen ownership, I've had quite a few major food flops that fortunately will never see the light of the screen. But here is a successful entremet inspired by a quintessential 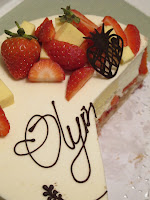 All is in keeping with trifle requirements. It has a jam spread sponge base (slightly overfolded as it was so thin and needed strength) in which are chopped strawberries macerating in sugar and balsamic vinegar, the custard takes the form of a jelly (I added some gelatin to make it set firmer) and finally the whipped cream, which is also stabilised by some gelatin. It is decorated with strawberry outlines piped from tempered chocolate, strawberries and blocks of the custard jelly with an even firmer set. You can just about see this in the second smaller photo on the right. The saddest thing is that it seems my recipe was accidentally thrown away T_T.

The Olympics Road Race cycle route runs by Kingston and I managed to video the leaders and photo Team GB heading the dreadful pelaton (what were they thinking!?!). I am actually really annoyed on a separate front too- here I am twiddling with the photo and cropping it down so you can actually see our English cyclists, I save the cropped photo under a new directory, closed the original, unthinkingly clicked yes to save changes and bam! It's gone! The cropped already-saved version replaces the original with no possible means of retrieval. AAARGH! It was part of a set of photos all taken while I was crouched down at the barriers and now it's gone! 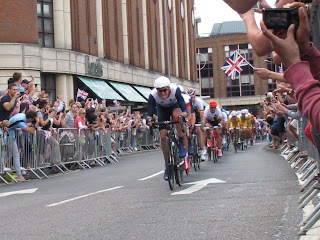 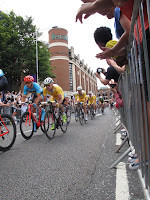 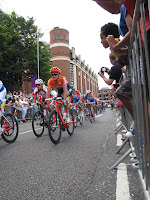 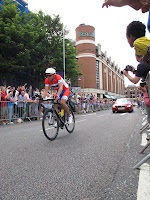 Anyway, in lieu of foody posts, you may have to brace yourself for Olympics related posts. I hope to catch the ladies zooming past tomorrow. These athletes really are incredible people. Sit back and admire the guts.