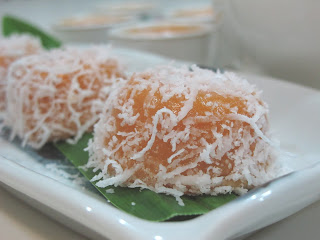 This is the first of the kuihs that I made at home. It comes from a tried and tested recipe found years ago in an Agnes Chang cookbook: 'Delightful Snacks and Dim Sum' - a source of far more reliable recipes than those offered by Amy Beh whose recipes often call for pinches of the oddest ingredients not normally used in traditional kuihs. This recipe only called for a minimal 4 ingredients (I don't think salt and the coating of coconut flesh counts) and a basic method of mixing everything together and steaming, which all looked a very promising and gentle introduction to kuihs. Ondeh-ondeh is another such kuih that one must try very hard in order to get wrong and shall probably feature in the days to come. 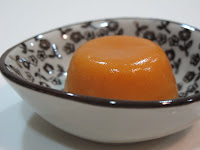 These kuihs steam themselves into a wonderful vibrant orange colour. I've included a picture of the kuih in its pre-coconut state. No colouring was used, it all comes naturally from the sweet potato- imagine how awesome it would look if I used a purple Japanese variety. They are soft and springy, aren't as oily as kuihs are wont to be from their prodigious use of coconut milk, and taste wonderful. My only niggle is that I wish I had made them smaller so I have a greater surface area (per unit volume) onto which to stick on more coconut meat.

A note on tapioca flour: it gives a nice bounciness to things even if the resulting kuih isn't quite as resilient to determined mastication as when glutinous rice flour is used.

(Yays, I have unearthed my stock of Japanese tableware!!!)