Since a wonderful trip to Singapore where I enjoyed a blissful kopitiam breakfast of kaya toast and soft boiled eggs at one of many Ya Kun Kaya Toast coffeestalls, I have been imbibed with a vague yearning to make my own kaya. A prodding from my bf expounding the joys of this satisfying fare later and I set to work in the kitchen. The highly acclaimed kaya recipe from my mum's guardian turned out too sweet with a very sticky texture, as did another recipe apparently used in an actual kopitiam. Finally, it was a recipe off the internet that produced the desired taste and texture: not too sweet, smooth, the good taste of santan and the fragrance of pandan (also known as screwpine leaves). 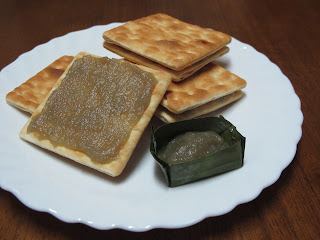 Some people quite like having lumpy bits in their kaya- it seems more authentically homemade, I guess. Myself, I prefer the silky smooth versions of this coconut custard. So, similar to the making of curds, I strained my eggs of the nasty egg white strands and cooked my kaya over a hot water (bubbling water in fact) bath, stirring continuously with a whisk. Possibly you don't need to use a whisk, as my father maintains in the old days they just used chopsticks for the stirring, but I rather not risk letting half and hour's work go into producing chunky kaya. I emphasize, half an hour's work and not a laborious hour and a half often moaned about. It doesn't take long. However, bear in mind that my water was at a rolling boil and I was using a whisk to compensate (I had to wear oven mitts to keep splash burns to a minimum)! The result is wonderful and lump-free.

The original recipe calls for 10 eggs, 400g castor sugar and the coconut milk of 2 coconut milk. This is all rather loose measurements, especially the coconut milk, so I've measured it all out. I also halved the recipe- this amount makes enough to fill a standard jam jar. No need to blend the pandan leaves and squeeze out the juices either, just drop the leaves in with everything else and it does the job, imparting good fragrance and also coloring the kaya a murky green.