This is an apt-sounding restaurant to celebrate the first full day my bf spent in Malaysia following his safe arrival late the night before. XD 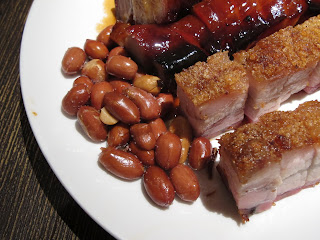 Reunion's claim to popularity is largely due to its offerings of Hokkien mee, siew yok and, to a lesser extent, char siew. As 'street food,' Hokkien mee (referring to the fried noodles in dark sauce here) rarely finds its way to restaurants, much less in as good a rendition as found at Reunion. Naturally all three featured on our menu that night, an explicit request being placed beforehand to ensure that a serving of the siew yok be reserved for us. It was a good thing too for even as our orders were placed, we heard the doleful sigh from a neighbouring table on learning that the kitchen was out of siew yok.

The dinner started well. We were promptly led to our table in a room reminiscent of open air coffee shops, what with the white tilings, though clearly of a more refined nature. Lovely private tables on the other side of the restaurant are available, sans this nostalgic feel, but such was not our draw. Following the placement of our orders, a side nibble of boiled peanuts and pickled lotus slices were placed in front of us. The peanuts were lovely and soft, swollen to gargentuous proportions, but I found the lotus a little too acidic from my liking. 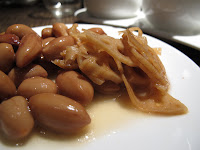 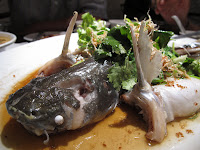 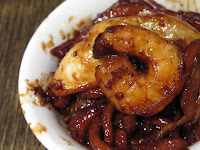 Sadly, service then took a severe dip. A call had to be made for more teacups (only half the table had been provided them despite the order of tea for all) and once more on discovering one of the clear glass cups was cracked. Happily, 15 min later, the siew yok and char siew arrived. However, to the hunger diners, the lack of rice to accompany this side dish was rather aggravating. Several reminders later and we remained riceless. Even a firm stomp up to the front desk and complaint later, still no rice appeared. Tempers were well frayed by then and two of our diners had practically risen to their feet in indignation before the rice finally arrived, cold. The rice came 15-20 min after the meat and it was cold! It had clearly 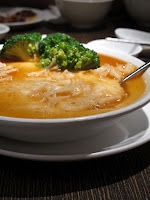 been sitting around since the pork was served, just never brought to us.

After that, the food leisurely trickled in. Chinese meal standards, it felt rather a long drawn meal, as we had no more than 1 or 2 side dishes at any one time due to their staggered arrival (except at the end of the meal when satiation had been reached).

Anyway, on a more pleasant subject: the food. Besides the three already mentioned, our order included: steamed tofu in two styles, steamed Patin with minced ginger and spring onions, stir fried kangkong with 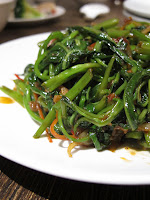 belachan, and bittergourd omelette. The vegetables are standard fare, I like that the bitter gourd was sliced fairly thin, but they weren't outstanding. It felt like good home cooking. I guess the same applies for the fish, even though for me, having been deprived of tropical fish for such a long long time, its wonderfully smooth flesh was rapture. The steamed tofu was good in an unexpected sort of way: it was more egg than tofu, and wonderfully delicate steamed egg at that. Lastly, the notorious fried Hokkien mee. It was good! The noodles weren't overly gummy or sticky while still nicely coated in a lovely thick sauce, and it came complete with pork liver, fried cubes of pork fat, and sambal belachan.

The food was excellent and comparable to true kopitiam grub, just set in more comfortable surroundings but with service (perhaps only for today, perhaps only for us) enough to have you reeling.