How shocking! Despite my earlier profusions on minimizing blog neglect, I now face the sorry realization that it has been over two months since my last post. Doing a PhD entails quite a bit more work than I anticipated. It seems my brother and bf are very poor representations of the general post graduate populace. To be honest, I am still struggling with the 9 to 5 concept and that really, it is a job. 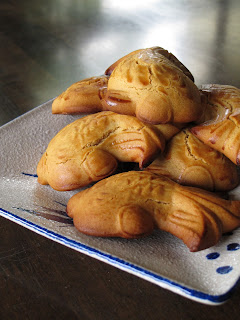 Anyway, I intended to post this at the start of the MidAutumn festival, sometimes called mooncake festival as it involved special cakes being made to be offered up to the moon goddess (it must be said that since man’s bouncing off the moon, this homage has grown noticeably less observed, but the tradition continues). Mooncakes are wonderful things. I am a stickler for the traditional lotus and red bean flavours, and at a stretch, partial to pandan lotus too, but that is the extent of my adventurism. The newer (very Japanese inspired it feels) flavours are all good and interesting but to me, a pale (^^) comparison to the original. I am not keen on snowskin mooncakes- a Japanese influence I actually feel unwelcome. The lovely baked skin of the mooncake is the best! So, no wonder then that Idecided to make gong chai paengs, which is basically a 'biscuit' that is the mooncake skin.

To make the gong chai paengs , I used little fish moulds (typical moulds are of dragons, carp or piggies), acquired during a trip back to my parents' hometown of TaiPing. There, I also met with a frankly amazing lady (family ties- back in the old days, families were a lot more complicated. This compound with size I think.) who taught me how to make pumpkin mantous (to be posted in the coming months). Below you see my edible aquarium pre-baked. 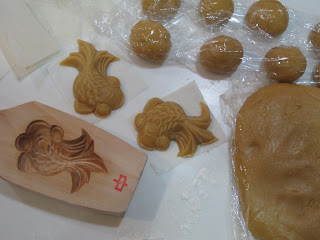 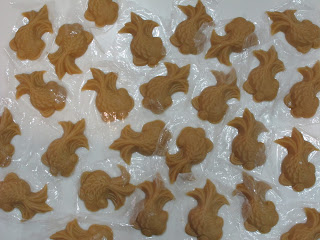 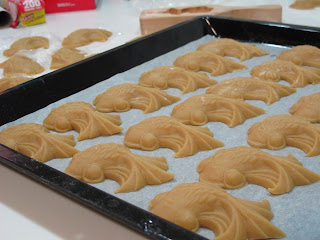 GONG CHAI PAENG (had some trouble reading the recipe, nor can I find its source, that I scribbled out while making these so possibly the flour proportion is off- shall be remaking them at some point to check)
*My dad, who was observing my toil, remarked that back in 'the old days' he would just pack as much dough into the mould as possible and slice off the excess. Possibly this will work for you and it is certainly much faster, however I found that I lost the edges of my fish as the dough stuck to the knife. 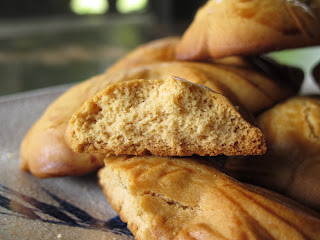 The freshly baked gong chai paeng will be crunchy! You shall need to leave them to sit around for around 3 days before they soften to their usual dense cakey texture. Mind however, I made these in Malaysia so the condition under which they went from biscuit to cake was a humid one. Also, mine were a little cracked- prevent this by spraying them with water before baking.
Posted by mabel at 01:30