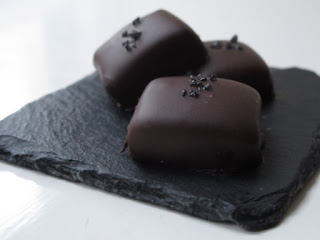 I have had a brief suspension of the baking ban over the holidays and was quite the gleeful one in the kitchen churning out edibles before this window slammed unceremoniously shut on my plans. Fortunately I managed to squeeze in a light chestnut cream meringue pie, raisin pie, brioche and butter pudding with raspberries, lebkuchen and the chocolates at hand before this happened. Copious photos have been taken, archived and ready to be posted in the weeks to come. Other cooking opportunities came by way of Christmas dinner, which was quite the greedy affair. I am pleased to say that brussel sprouts have at last found a place at our table in the form of sprouty bubble and squeak. Recipes coming soon!

In the meantime, the New Year is rapidly approaching and I feel I ought to sit down and think through some stereotypical resolutions. Certainly a healthy lifestyle is always desirable, and for me that means regulating my sleeping hours and ending my chronic snacking habit. Adding to my money pot is also pretty high on the list. However, and most importantly, I need to spend more time reading  the bible and also certain theological books out there written by terrific Apologetics. Ignorance is certainly not bliss but embarrassment when I cannot even soundly defend my faith. For shame!!!

Anyway, enough of the babbling, more on the photo. What you see are some post-Christmas dinner truffles I made consisting of a very soft coconut and baileys ganache coated in dark chocolate couverture (arrghh no, just realized I don't have a photo showing the inside of my truffles). The black sprinkles are volcanic salt that I bought years ago from Wholefoods and have been aching to use since. In my zeal, I sprinkled a little too much salt over. Given the salt content of the ganache, a singular grain, or perhaps two, would probably have sufficed. Further grief mounted when I accidentally splashed the greatest enemy of all, water, into the chocolate while tempering it. Besides that, the temperature of the chocolate ought to have been marginally higher for true chocolatey shine.

To anybody who feels like attempting this, please note that the ganache is very soft (these truffles need to sit in the fridge!), which is what resulted in my droopy rectangular shape. Soft melty ganaches are bad for achieving a cuboid with clean defined edges.  It did not help that I had no dipping forks either. This truffle would definitely be happier as a moulded chocolate. Next time, I intend to use only coconut cream in the ganache to bring out the (barely there) coconut flavor more, and to lower the cream to chocolate ratio. Nevertheless, I still think they were pretty good indeed, regardless of my bias and penchant for salty chocolate. They are my first attempt at truffles out of Le Cordon Bleu and feel a good last post for the year 2012. There is much to improve on and I shall enter the New Year full of thoroughly motivated. 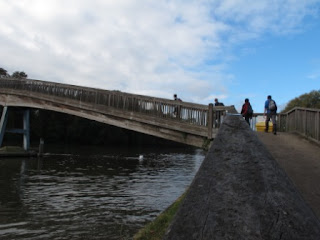 Not particularly Christmassy, but if you feel like having a family stroll in the rain over the coming holidays, this circular walk in the Chilterns is a suggestion. Conveniently located a mere hour from London by train, this light ramble takes you along the Thames to Temple Lock, past the historic Hembledon water mill to a well placed pub (lunchtime!), the Stag and Huntsman, and through Rassler and Davenport woods. The entire route can be found here.

The walk took us around 6 hrs to complete, just before yet another torrent from the sulky rainclouds that gathered above. Below are a few hurried photos I took on the trot. Weather conditions alternated between gloomy cloudiness, rain, and blinding sunniness. What a difference the lighting made to these quick snaps! 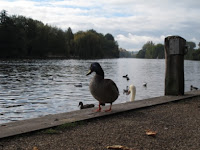 Duck looking on, at the foot of Marlow bridge. The walk begins! 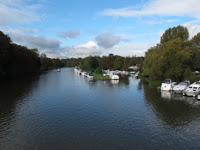 In the very top photo, we are crossing one of many bridges spanning the Thames. This is the view atop one such bridge. Not long after we stumbled into a duck with her fluffy crowd of ducklings who quacked in dismay at our 'awwws' and promptly nudged her children into the water 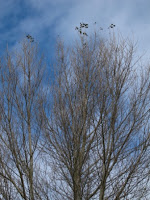 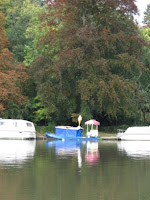 Walking along the Thames: a tree clinging to the last of its leaves (we did this walk at the end of October); and the most awesome ice-cream boat nestled between its clinical white neighbours. 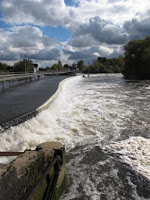 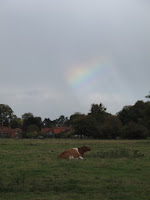 Hembledon water mill! You can see a tiny bit of its whitewashed walls in the photo. There was a sudden turn in the weather during the mile long walk to the Stag and Huntsman from the mill hence the cow and rainbow photo. We made it to the pub just as raindrops began splattering on our heads. 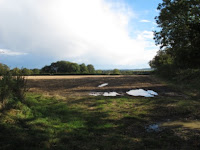 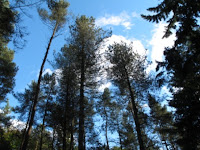 The clouds are gone and sunlight is streaming upon us. Even a muddy field looks something spectacular with stagnant puddles reflecting the brilliant blue of the sky. The clear skies remained as we walked through Rassker wood.

NOTICE:
This blog will be moving to a new, more appropriately named, domain soon: www.feeding-times.com.
Updates soon to come!
Posted by mabel at 02:05 No comments:

Christmas is nearing! My chemicals have arrived and things are starting to get manic. Suddenly lab hours are on the rise. But woes upon me, I forgot to make a fruit cake let alone a Christmas pudding and it is too late now. A two week maceration in alcohol simply does not cut the mustard. All is not lost however as I have a sneaky plan awaiting to unfold come dinner time on Christmas day.


Anyway, on a separate note and in keeping with my weekly post commitment here is a croissant I made while back in Malaysia. 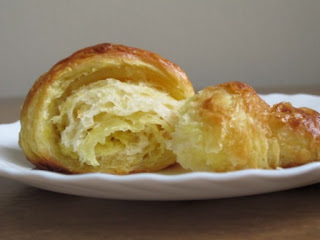 Pain au chocolats are my dad's favourite viennoiserie but, as I could not get hold of my box of baking chocolate, I had to settle for these plain croissants. Being sat in Malaysia, fear of melted butter dripping from my dough led me to the normally avoided margerine tub. The croissants turned out pretty well though. Rolling out the dough in 30 something degree madness was not quite as fearsome as anticipated and the use of margerine removed the need for mid-folding fridge spells. Away from UK and from the local bakery where I normally purchase my yeast blocks, I had to use instant yeast (I am always slightly wary if these will revive or not), at no great 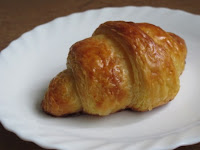 detriment. However, it did take a good 3 hours for the yeast to do their thing and grow my croissants.

My final product was lovely, light and crispy at the expense of rich butteriness. I made sure to roll the dough out thick in the shaping to get my cheery plump shape. Perhaps it is a little too rotund for conventional standards but I like all things round and shall stick by it. Yes, I am also aware of my sneaky mistruth in the shaping of the croissant- given its margerine content, it ought to have been crescent shaped for a straight croissant indicates a lofty butter-only status. But, who would know better save the limited few who ate it?


NB- Have just realised that I have been posting images of ridiculous sizes. No more! Compression is in order.
Posted by mabel at 00:25 No comments:

Email ThisBlogThis!Share to TwitterShare to FacebookShare to Pinterest
Labels: croissant

This is a little out of date but I may as well post it. 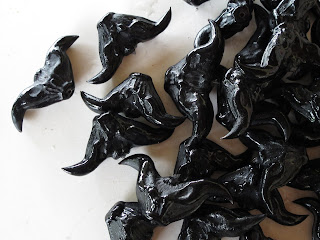 The harvest of water caltrop and hairy golf ball sized taro also heralds the coming of mooncake festival. At home, we called the water caltrop bull horns (ngau kok/lin kok). A fter boiling (around 30 min), cracking the intimidating black husk reveals a powdery white kernel. The husk has a somewhat strange odor that would call to my mind the unattractive waft of steaming horse poo. Nobody else ever remarked on this association perhaps this is only true for me. Fortunately the smell doesnt translate to the meat which is very starchy and has a lovely woody/rooty taste. Personally, the delight of water caltrops lies as much in their novel appearance, 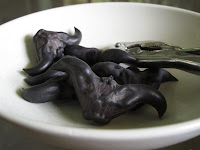 rare annual appearance, and the battle to remove it, as it does in their tasting.

Water caltrop is an odd crop indeed. There is little information I can unearth on it and wiki seems to provide the most information yet (in a broad overviewy sense). Besides general consumption and the fun of it, the water caltrop has seen use in India as a remedy for 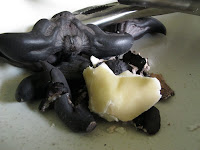 stomach issues and in poultices (I). Water caltrop starch can be found in supermarkets and is used in cooking to thicken soups and sauces. However, this is not made from water caltrop at all, but water chestnut starch (bad people are being confusing by mixing the two). More likely, you may unwittingly end up eating caltrop starch in ice cream- its substitution for cornstarch in ice cream 'improver' powders (2) results in a creamier and smoother product. Apart from its edible nature, an investigation into the properties of its starch suggests caltrop starch could be used for textile sizing, due to its viscosity being little affected by temperature over a large range, tests for which have already been performed confirming this (3).

My grandmother also used to make the most amazing toy out of water caltrops for us too. Many an hour used to be spent trying to core a caltrop and whittle down a chopstick to make a deadly spinning caltrop weapon. I meant to make one with this year's harvest but haven't had the time yet. For now my caltrops will wait in the freezer. 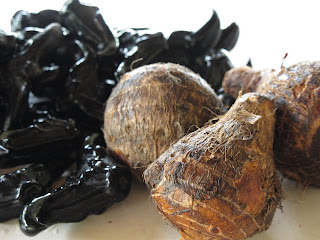 I am pretty sure most people know taros, what with the rage of taro flavoured puddings and taro bubble tea floating about the world, so I won't bother with giving them an introduction. Please note that these are taros not yam (I shall be posting a photo of a yam in a bit when I get around to typing out my recipe for a yam cake). Traditionally, we would boil the taros skin on, after which the skin slips off nicely leaving its steaming white flesh to be dunked in sugar and eaten. Winner!