On a quick break from the my Austrian holiday thread, here is the raisin pie I mentioned in my New Year post. I am not a fan of dull stodgy flaming mounds of Christmas pudding and so made this crumbly pie in its place on Christmas day. It incorporates the festive spices of Christmas and I used orange juice for a refreshing zing, normally aspired by candied peel except without any trace of  bitterness (yup, not fond of candied peel either). 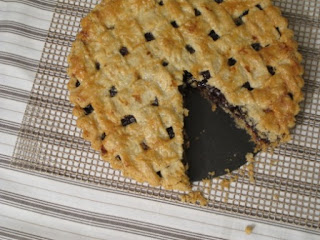 I used a flaky pie dough for the pie. Basically this means it has a higher butter:flour ratio with butter and water being the only binding agent, a little baking powder for the 'puff' to create flakiness, and usually no sugar or egg which would tenderize the crust. A generous substitution of ground hazelnuts was used in the  pastry, making it incredibly short (breaking up the flakiness). I also put in a little more salt than usual to bring out the flavour of the hazlenuts. 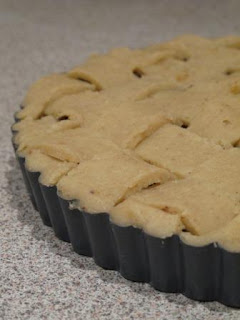 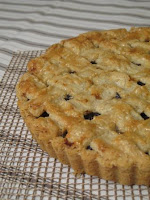 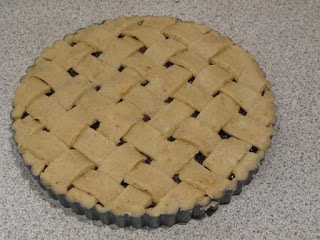 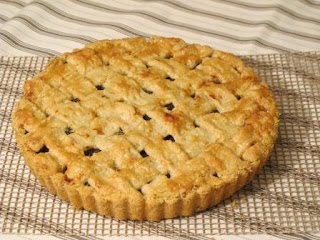 Considering how delicate this pastry was (super melty from the butter and tears easily from the lack of gluten), it was a very poor decision to make a lattice crust. Trying to manipulate the melting strips of dough caused me no end of frustration. A note to anybody who decides to make this, opt for a standard pie covering. Anyway, taste-wise, on its own or with a non juicy filling, the pastry would probably have been be too dry and crumbly. However, as a casing to the juicy plump raisins, it brought a nice crunch to the mouthful. This savory pastry also did well to offset the sweetness of the filling. Happy partnership! 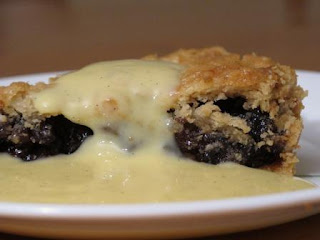 I served the pie was served with vanilla custard enriched with cream. True custard this was, not like the watered rendition that is vanilla sauce. What really makes a wholesome custard is the addition of the cream. Once the custard has thickened, take it off the hob and continue whisking (you may want to use an electric whisker). When the custard has cooled slightly, tip in the cream and continue whisking. This also helps prevent the formation of skin over the hot custard. My recipe for the raisin pie can be found below.

For the raisin filling