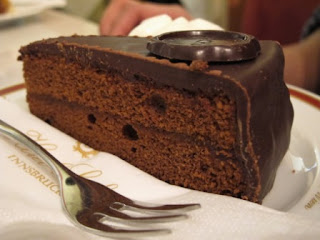 So, it wasn't Hotel Sacher, the birthplace of the iconic Sacher-Torte, but Cafe Sacher we went to: a little branch of Hotel Sacher sitting in Innsbruck and serving up this delectable chocolate cake. For the sadly deprived who have not yet managed to sink their teeth into a Sacher-Torte, it is a dense chocolate sponge with apricot jam and encased in a thick pristine chocolate glaze. There are many variations floating about, but "the recipe of the Original Sacher-Torte has remained a well-kept secret of the Hotel Sacher to this day." Thus, I present to you, the 180 year old original as "made as they used to be in the 19th Century." 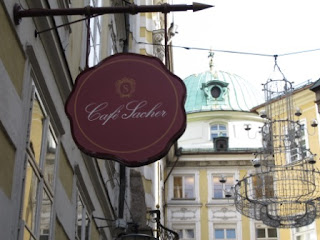 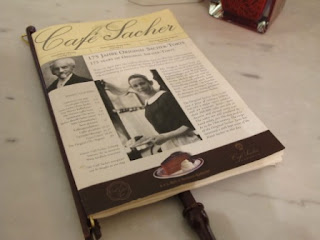 According to the very informative menu provided at Cafe Sacher:
"The success story of the Original Sacher-Torte began purely by chance: one day in 1832 the chef de cuisine at the court of Prince Metternich had fallen ill just when high-ranking guests were e were expected. And so it was up to the young apprentice cook Franz Sacher to create a dessert thatwould satisfy discerning palates- and the Orginal Sacher-Torte was born. Wihin a few years it had conquered the world and pastry lovers from the countries of the Austro-Hungarian Monarchy and the rest of Europe and across the ocean in America treated themselves to the sweet delight fromAustria. even Empress Elisabeth could not resist the cake of Eduard Sacher, purveyour to the Imperial and Royal Court. An original bill issued by the Hotel Sacher to the empress is stil being kept at the Haus-, Hof- und Staatsarchiv." (court and state archives) in Vienna.

Every once in a while the Hotel Sacher receives letters addressed "To Hotel Chocolate Cake". The recipe for the world famous Orginal Sacher-Torte has been handed down from generation to generation since its creation in 1832 and only very few staff members have ever seen the original, which is locked away in a safe. Following a legal dispute with competitors a decision oin 1962 that the cake produced at the Sacher is the only one that may be called "Original".

It is not only the perfect mixture of the ingredients and the right temperature and humidity in the bakehouse but also the exact sequence of the 36 individual steps right up to the packaging of the cake in exclusive wooden boxes that are crucial for the success of an Original Sacher-Torte.

It goes on to give a little history, and a little more propaganda, of the illustrious Hotel Sacher:
"After several years in the service of Prince Metternich and other employers, Franz Sacher opened his own delicatessen shop in Vienna. His son Eduard enjoyed the reputationi of being "Vienna's finest palate pleaser". He was purveyor to the court when he opened the Hotel Sacher in 1876. In 1880 he married Anna Fuchs, the daughter of a wealthy butcher. Anna started work at the hotel right after the wedding. She immensely enjoyed the work and, given her husband's poor health, gradually took over the reigns at the hotel. Following Eduard's death in 1892 she ran the Hotel Sacher alone.

It was under her "regime" that the Sacher acquired its legendary reputation. And it owed this reputation not least to its "chambres separees" that were shrouded in mystery and the sources of many rumours.

The Sacher was a meeting place for the intire aristocracy right up to the sons of the imperial family who greeted "Madame Sacher" in her realm with a kiss on the hand. Anna Sacher had steered the course of the hotel for forty years and had turned it into a glamorous stage for leading figures of society, politics and arts. The Hotel Sacher then passed into the possession of the Gurtler and Siller families and is being run to this day as a family business by the Gurtler family. Much has changed at the Sacher over all these years and has yet remained true to its original style and ambition. "Everything that is new", says Sacher manager Elisabeth Gurtler, "is usually nothing but the promising child of time-tested older achievements, an ideal continuation of tradition."

After two years of renovation and expansion from 2004 to 2006, the Sacher team have successfully combined the house's well-known and cherished Viennese tradition with a unique lifestyle. On a total of seven floors the luxurious hotel now offers its guests 152 rooms, exceptional architecture, innovative design and holistic treatments at its exclusive new spa.

The Hotel Sacher is as much part of the city as the State Opera, the Giant Ferris Wheel at the Prater amusement park and the Lipizzaner horses. The Sacher, as it is often called for short, combines modern Viennese comfort and luxury with the charm and atmosphere of imperial times." 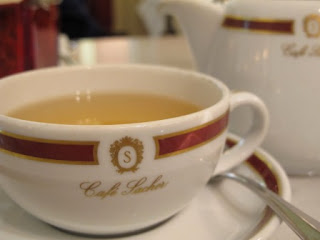 As you may have gathered from the rather effusive and disjointed bit of history given in the menu, Hotel Sacher is very keen to emphasize its originality. In fact, at the back of the 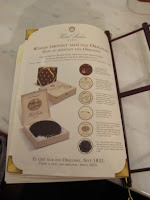 menu they even provide a very explicit manual that you may be able to discern a true original from imposters. But regardless, the more important issue at hand is the taste of this wondrous original cake.

Actually, it was a little drier than I expected- possibly because I have been fed too much of the wrong type of moist chocolatey cake (or is there something wrong with meee??). The apricot jam running through and atop the cake was very welcome indeed. But I now know the measure against which all Sacher-Tortes should stand. What was a bit disappointing was finding those giant bubbles running through the cake. Some busy one has clearly forgotten the gentle but crucial tapping of the cake pan to release those big bubbles before popping the cake into the oven. Also, I am sure they could and should have made a tidier cut than that, what with the disc of Hotel Sacher approval smugly stuck on. 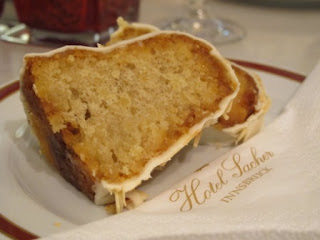 Besides ordering the "Original Sacher-Torte mit Schlag," we also had "Original Sacher Gerwurzgugelhupf (mit Ingwer und kandierten Orangen)- Vienese ring cake with sweet spices (with ginger and candied oranges)," and "Hausgemachter Wiener Apfelstrudel- homemade Viennese apple strudel." My favourite by a long way running was the gerwurzgugelhupf. On this spoonful I could wax lyrical. I know, that is a pretty shameful admission given we are talking about Cafe Sacher after all. But truly, the not too rich yet wonderfully moist cake (I feel an substantial lot of simple syrup went over this gugelhupf to make it so) was so good and refreshing. I even ate my bits of candied oranges and it was all in yummy. 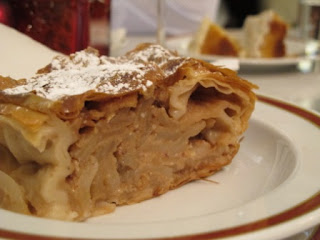 Lastly, the Apfelstrudel! Hmm, so I'm still thinking about the gugelhupf.. the apfelstrudel was nice. The slices of apple of were nicely balanced between being mushily overbaked and crunchy rawness. It's all in the dimensions of the slices! There was a good level of sweetness (I don't think there was much added sugar) too. However, I found the pastry a little doughy. Strudel dough has less butter than puff pastry and rather than rolling and folding the dough to create laminations of butter, it is stretched to awesome dimensions and melted butter painted on (in fact, this great site depicts it all- I must try making it someday). So I was expecting a soft, not too buttery but flaky and delicate dough. What I did receive seemed to sit a little on the clumped-together stodgy side. Anyway, it was also here that I first encountered vanilla sauce.

(sorry for poopy photos- I felt a little conspicuous with my camera, even though it is only a point and shoot)

NOTICE:
This blog will be moving to a new, more appropriately named, domain soon: www.feeding-times.com.
Updates soon to come!
Posted by mabel at 09:22