Busy busy busy- I feel I have been overclocked since this year began. Before was the single minded charge to pulse laser deposit a film (didn't happen) by the visit to KAUST and now I need to start thinking about conjuring something up for the Early Stage Assessment to show that I'm not all faff. Even more than that, I really need some preliminary results for when I head over to MIT for a week in the summer. I am just a little excited about this excellent opportunity and have my good God to thank for it, but not quite as delighted over having to drag my sodden self through the rain to college last Sunday night to pop some samples into the furnace. 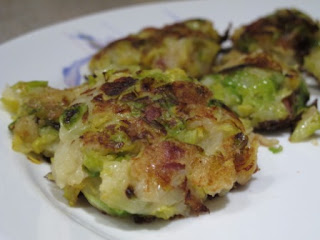 A little comforting is in order in the form of blogging and while it does feels a little odd posting something that was made three months ago, going through my photos of food and recounting the 'good stressy' that went into making it is my little treat to savour. Also, given that the weather now is comparable to that over Christmas, this recipe fits pretty well with the prolonged winter chill as a nice homey addition to any meal. As I may have mentioned before, the unwelcome intrusion of brussel sprouts at our Christmas meal has always been deemed a poorly conceived Christmas tradition to be tolerated. In her attempts to persuade her staunchly declining family to consume it, my mum would extol its nutritional virtues while bravely gulping down a few heads. Nevertheless, the sprouts would soon after be quickly relegated to the end of the table where they would remain untouched for the rest of the meal.

Last year, however, I was given full presidence of the kitchen for Christmas day and was determined to give the sprouts their moment of acceptance. Frying them with bacon and flaked almonds the year before still wasn't quite enough to endure the sprouts to us. So, this year I thought bubble and squeak. Actually, I  thought of every single cabbage containing recipe I liked, latched on to okonomiyaki and then trained it down to sprouty bubble and squeak, and there you have it. 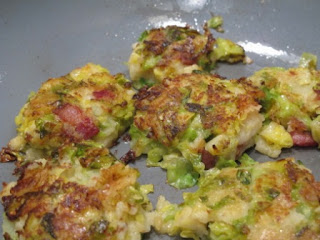 I  spent a lifetime trimming off the stem and the nasty bitter outer leaves of the sprouts. Even though I wasted a prodigious number of leaves and the better part of Christmas day I had lovely sweet and vibrant green sprout leaves in the bubble and squeak that my family gobbled. Having spent all that time preparing the leaves, I couldn't bring myself to the effort of grating and wringing the potatoes, besides which my family were braying for food by then. So I just boiled what potatoes were at hand and mashed it up. This also explains the lack of decent photos- trying to prod mounds of potatoes into a more attractive arrangement under horrible stove-top lights and handling a camera with potato-ey fingers, all the while with hungry breaths down my neck, is a tricky thing to do.

A note on the bacon: I had the poor fortune once to have to resort to lowest grade (i.e. 'value') bacon while cooking under budget for church. The amount of brine that oozed from the meat as I let it sit in a hot pan was appalling. My bacon wasn't frying at all, it was boiling! It took a good slug of oil in place of what ought to be scrumptious bacon fat to get things going. I guess most of you are rolling your eyes as if it were the most obvious thing, but to actually see the poor quality of the meat like this was disquieting.

NOTICE:
This blog will be moving to a new, more appropriately named, domain soon: www.feeding-times.com.
Updates soon to come!
Posted by mabel at 01:02