Whoopsies- forgot to publish this before I left on Sunday. I'm putting it up, unadulterated, anyways for it shall do well to tide over the days while I sort out my photos from the trip and catch up on some sleep) 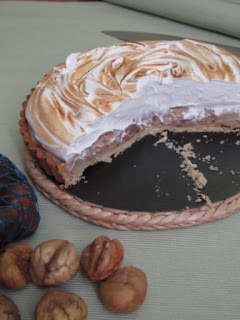 One last post before my Middle Eastern stint. Things have not gone to plan unfortunately. After all that scrabbling around, I managed to make a target for pulsed laser deposition (PLD) in time to be mounted on Thursday before the actual deposition the next day. However, I just found out that the powder synthesis may be sensitive to batch size and thought it safer to do a quick x-ray dffraction on my target to ensure it really was as I thought it to be. That's when the fail happen: I somehow snapped my target into two. Nooooooooooo! Stood there gaping at the fragments for a good 5 min.

(deep breath) Anyway, I've had quite a lot of Chinese food posts this past month so it'll be nice to start catching up on the backlog of stuff that I made over Christmas, not to mention my brownie and sticky toffee pudding experiments since. Thus you see my chestnut meringue pie. 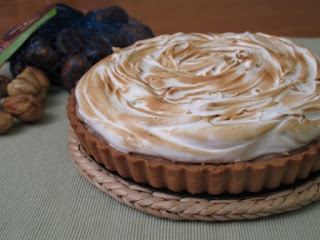 I used a sweet pate sucree crust (recipe from my time at Le Cordon Bleu), made more delicate by a 40g substitution of icing sugar for castor. I also used a little extra salt (3g in total) and vanilla. The pie is filled with chestnut cream and chunks of roasted chestnuts that I painstakingly peeled, and topped with a creamy Italian meringue. The sweetness from the meringue and pastry is rather necessary as the chestnut cream isn't that sweet or rich. There has been some debate about the texture of the filling and the chestnut chunks weren't wholly appreciated. I thought it brought a more interesting bite but it meant that you did also get crumbly bits that spoilt the smoothness of the rest of the filling. So alternatively, you could just double the amount of cream filling and omit the roasted chestnuts. In either case, be sure that the chestnut puree is very fine, or it will be grainy. To make a thicker creamier filling, don't whip up the cream but throw it all into the food processor and whizz. 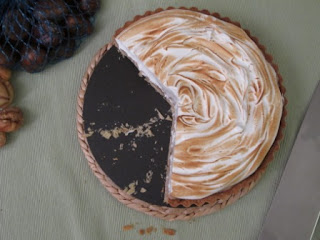 For the chestnut cream filling

For the Italian meringue 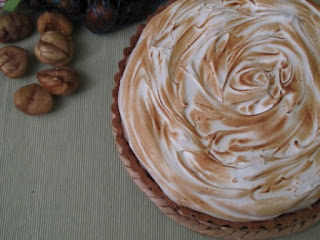 Also, some pointers for blind baking:
(Sadly all the photos taken of my food over Christmas was done in the absence of natural light, we had these puddings after dinner)

NOTICE:
This blog will be moving to a new, more appropriately named, domain soon: www.feeding-times.com.
Updates soon to come!
Posted by mabel at 02:00