What a difference these few days of glorious sunshine has made. Suddenly blossoms are blooming and the masses are crowding outside in a state of happy congeniality to unfold themselves out upon London parks, myself with them. It almost makes me laugh, to observe these stately oaks and limes shyly budding off little furls of baby green leaves. 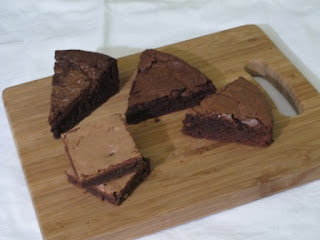 And it is not just the trees that have shed their stern winter demeanor. I was treated to the sight of a gentlemen with a bouncing toddler wrapped around his neck. The little one rode those shoulders with  delight, and clutched in his grimy hands a Mr. Whippy, which state was fast become more liquid than solid and steadily dripped off onto his venerable mount's head who bore it all with calm dignity and continued his imperturbable stride. Meanwhile his wife flapped around him, armed with a tissue and trying to tend to the sticky crown of his besmirched head 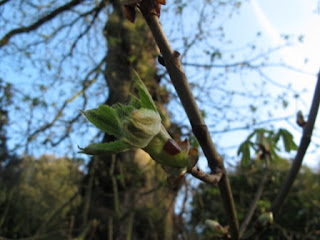 But harkening back to those gloomy days past, one of my mini baking feats then involved the ubiquitous brownie. It is a testy subject and identifying the requirements for a good brownie (let alone the best) tends to result in quite strong verbal contention. So I hunted around and made four different brownies that I felt provided a general representation of the main brownie types: moussey, fudgey, chewy, and cakey (depicted below clockwise in that order, beginning at the top left). These all have slightly different taste, textures, and preparation method. After an overnight stint in the fridge, I set them before the graduate population at Imperial and waited for comments. 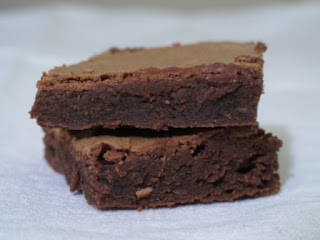 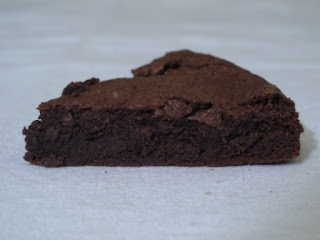 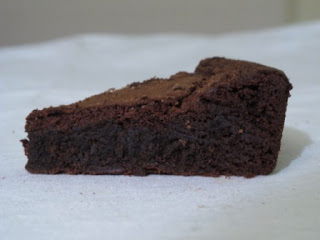 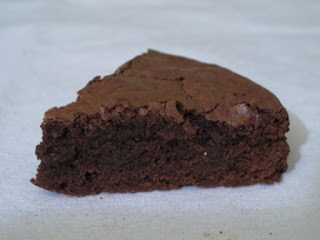 The recipes can be found through the links below. I've also added my own quick description of its preparation and the end result.

the moussey one- 'ribbon' method
This brownie manages to be very soft and squidgey without being dense. There is a lot of sugar in this brownie, giving it a more caramel taste than rich chocolate. In fact, there is so much sugar that during the baking you actually get a separate, light coloured, delicate sugar crust lifting off. On a whim, I also added chopped bananas to the mix- do ignore, I hope it didn't affect the brownie too much. 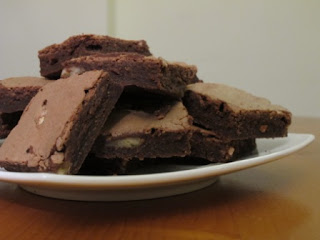 the fudgey one- chocolate fondant method with all important beating
Like the moussey brownie, the fudgey one does not have a distinct crumb but everything is amalgamated into one fudgey mass. It has a good chewiness, and the most beautiful crust of all the brownies- lovely dark rivulets of goodness. Fresh from the oven, it didn't shine particularly in the taste department. It is not as sweet (as the moussey or chewy one) but wasn't quite deep and chocolatey. However, it is incredibly rich, and, following a good night's rest in the fridge that allowed its flavors to truly develop, it near topped my list. This isn't just any brownie, this brownie hits the decadent mark. 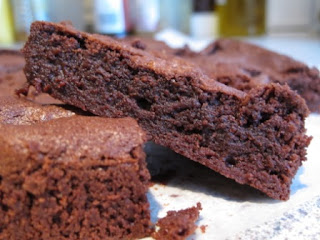 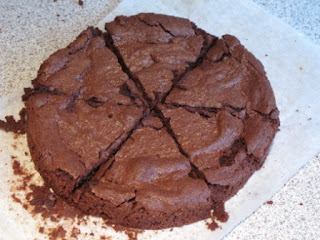 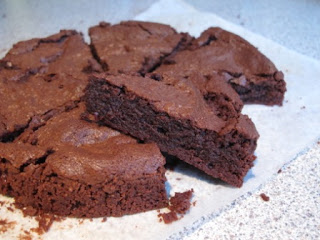 the chewy one- chocolate fondant method
This is another of David Lebovitz's recipes (without the ground mints), and moving up in cake-likeness. Admittedly, this is what springs to mind when I think of a typical brownie. It has a fairly dense crumb that makes a chewy interior, and a good crust that is nicely furrowed with a slight sheen. In fact, during the mini taster of the brownies when fresh from the oven, the chewy brownie was best loved. Taste-wise, there is a good degree of chocolate though it was felt to be on the sweet side (at levels between the fudgey and the moussey one). 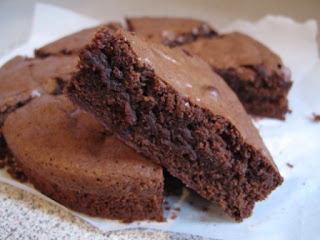 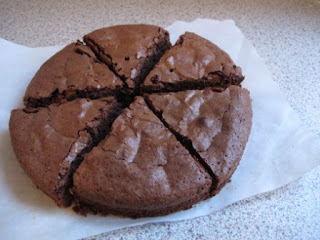 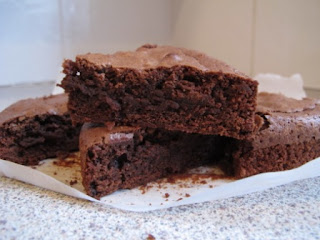 the cakey one- creaming method
I have to admit, this is my favourite for its intense chocolate-ness. I quite like its texture too, rather crumbly and soft, with the slightest chew without being heavy. This is completely different from the previous three brownies, which all had their small similarities. Indeed,  my heart gave a little skip of joy when I first read the description of this brownie to be 'peaty,' and peaty it is. You can almost suck it and its cocoa-y wonder down. A pity about the major cracks across its crust however. 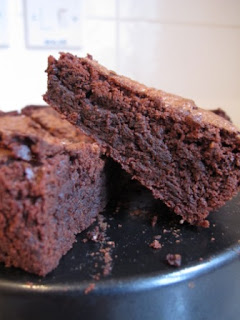 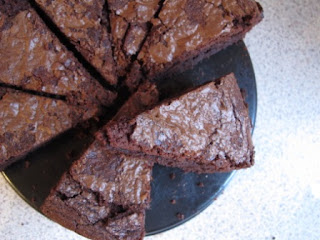 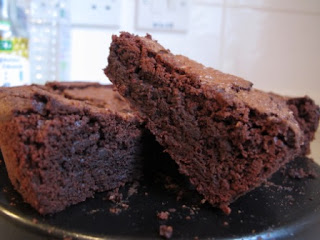 Obviously these are my own subjective opinions, and the brownies were only tasted by a very select demography. The recipes I have chosen may not have been the true epitome of a brownie of these classes and there is the possibility that I am incapable of following instructions. So please, if you pledge by a certain of these recipes, don't be too distraught; in all likelihoods I just didn't make it as well as it ought. Nevertheless, the results are as such:

The cakey one was voted unanimously to have the best flavor, no doubt thanks to the whopping amount of Valrhona cocoa powder I tipped into it. In general, following the overnight resting period, both cakey and fudgey ranked either first or second. Moussey seems to be the marmite of the bunch, either being voted first or spurned to the last rank. The chewy one that did so well fresh from the oven, while it didn't deteriorate didn't improve with time either, so could not hold its place amongst such tasty competition and took a modal third place.

So there you have it. I shall be posting on more brownies soon: candied pecan brownies and my supreme banoffee brownie. In the meanwhile, I cannot wait for this tomorrow's Cheese and Wine Festival at Southbank.


NOTICE:
This blog will be moving to a new, more appropriately named, domain soon: www.feeding-times.com.
Updates soon to come!
Posted by mabel at 01:39 No comments:

The grim weather is lifting! I see no trees sprouting their green buds but have strolled into my first snail this year. Spring must surely be around the corners for the snails to have finally peeked out around their sputumous doors and ventured forth. Yet I still feel little motivation to shed my winter blubber. In fact, I have been industriously adding to it on account of my re-awakened love for cheese. 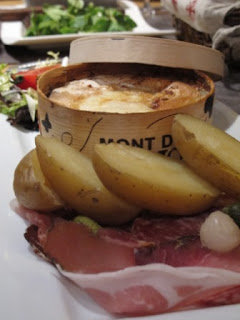 This all sparkled off a few weeks back went I went to France with my siblings (and friends)  to scrunch in some end-of-season skiing. I'm a little fanatical about this activity, and it is for causes like this that I have been marking my weekly stack of lab reports, and wailing inwardly every moment of it too. But besides being the most awesome sport in the world, this was likely to be the last time in a while that us three 'children' of the family would  ski together. 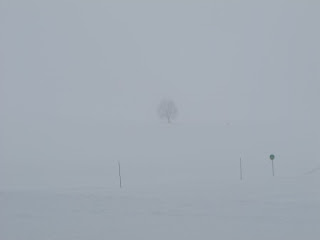 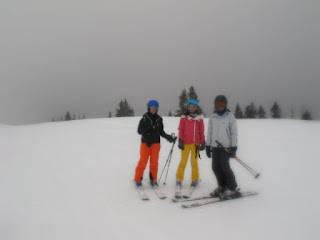 Time is grinding inexorably on and, more and more, each of us are living our own little lives. My sister is flailing about trying to clutch back what few few hours she can from the beast that is work, while my brother is abandoning us for the city of opportunity, New York. So next year will see me all alone without the familiar midnight bellows of my brother, ordering gamers to desist from their lemony ways. 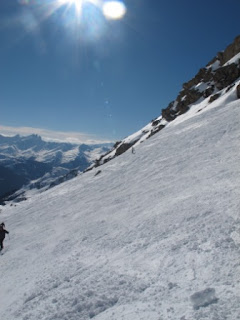 Anyway, so off we poddled to Meribel, in the Savoie region of France. Admittedly the skiing was not stupendous. The snow was heavy and decidedly slushy, and for 5 of our 6 days out there, the visibility was so poor that at times we struggled to see the next marker along the piste. It was faintly disconcerting that we could not tell on which side of the markers we were on, either: safe on the piste, or carving to our doom. There was only one beautiful day with clean blue skies (in the distance, you may just be able to make out my brother making his way off piste in search of powder and, under grayer conditions, my brother and his friends). The food was good, but wasn't really the priority. 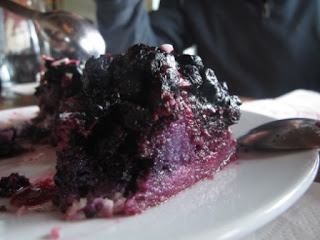 For that, it may just be possible that the best thing about this holiday was the company. The chalet we stayed at housed a few other families. The most notable of them constituted of oneof the most intelligent fellow I have every encountered, his lovely French wife, and their progeny who is also doing a PhD. Needless to say, under such lofty scrutiny I capped my prattlings that they may never know the true extent of our intellectual disparity. 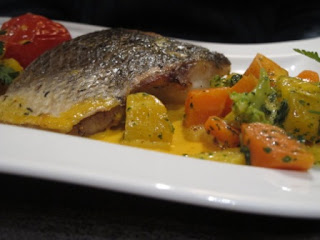 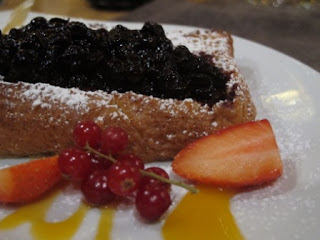 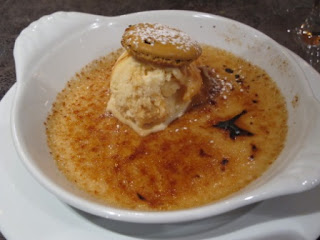 With such a wealth of knowledge (stark remainder to self not to get too cornered into my own little subject- that fellow knows so much from such varied subjects too), those were some of the more interesting mealtime banters I have perched through. However, with regards to cheese, it was his wife and her precious trove of all the little Parisian idiosyncrasies that naturally took precedence. 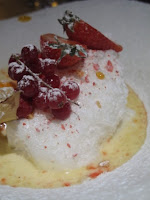 Living in London and off supermarket cheese, I always felt the rind to be the best part of soft cheeses. Everything is gooey and creamy, and I quite enjoyed the mouldy taste. But with our continental companion, that was an absolute 'non', it spoils the taste of the cheese. Amidst howls of dissent she did grudgingly assent that perhaps it was acceptable, on the condition that we painstakingly scrape off the mould from the rind. But that was as far as cheesy concession was pushed, the poor lady fairly refused to speak to my brother after he suggested our common British practice of baking Camembert. 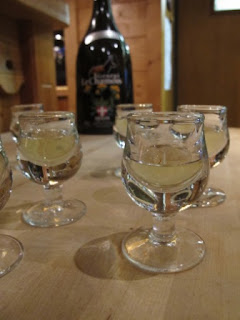 During that time, I managed to procure the fabled Mont D'or, as well as several regional cheeses such as Reblochon, Tome de Savioe and my absolute favourite, Beaufort d'alpage. Having now had a taster of good (and ripe) French cheese, I have to say she is right. The rind does detract and is a poor compensation for the true cheese flavor. But it is no wonder the British-raised likes the rind though. Of what supermarkets typically offer, it is cheese around the rind that is most mellowy ripe and flavorful. 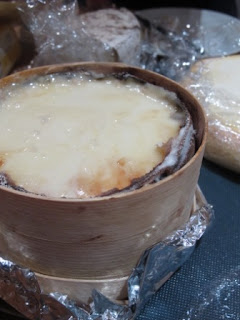 So now I'm afraid I've turned rather snobbish towards cheese. Supermarket fare usually disappoints and it is a rare gem of a pasteurized cheese that satisfies. Harkening back to the cheese course at Le Cordon Bleu, no matter what concoction of bacteria we pump back into the milk after pasteurizing it, it is hard to achieve the spectrum that lived before (sans the bad stuff), so the poor cheese becomes just a little feeble. 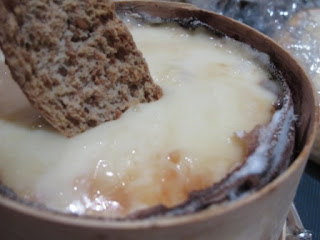 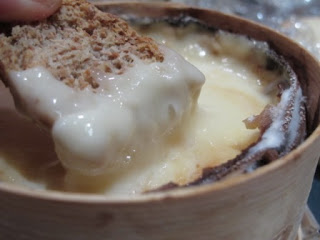 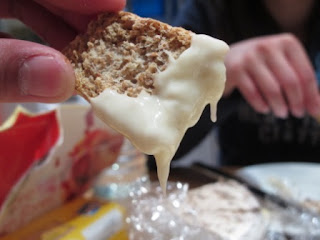 As a result of this new obsession, cheese has been instilled as an after-dinner must, and also as a new snacking option- it has even begun to supplant chocolate. Indeed, I have mustered quite a selection. Not ten minutes since, this included three different Tomes (de Savoie infused with truffles, de brebis, de chevre), a Beaufort d'alpage (I had the man hack me 30 euros of the stuff after first tasting it in France), Comte, Mont D'or, Gouda, and my brother's horseradish flavored Cheddar. Sadly in the time it has taken me to write this post, I've nibbled through the Comte and two Tomes, and my remaining cheese stocks are worryingly low. Time to embark on another cheese hunt.

(There is a remarkable lack of cheese photos, mostly because I can't wait to get started and, as I keep my own company, have rather savage habits such as chopping off the point of the cheese.)